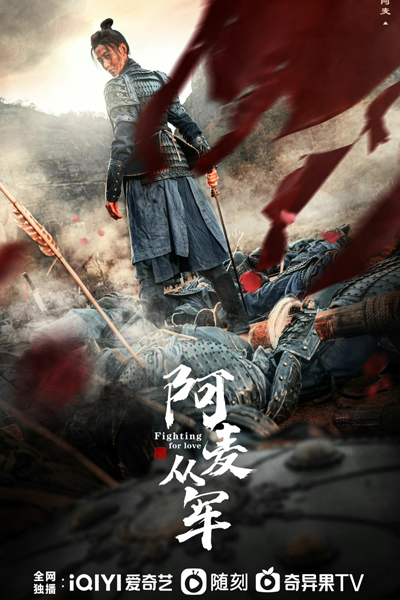 Other name: 阿麦从军 A Mai Cong Jun Soldier A Mai A Mai Joins the Army

It tells the story of the founding female general of Nanxia who took off her red robe in exchange for battle gear and became the goddess of war. A Mai, the daughter of a Nanxia official, is out for blood after her family was killed by her childhood sweetheart Chen Qi. Having grown into a young woman, she disguises herself as a man and wanders the lands to seek revenge. During a chance encounter, A Mai rescues Shang Yizhi, the son of the Crown Princess, and helps him out of many predicaments. Their fates have been intertwined ever since. When war broke out, A Mai joined the military. She moved up from a foot soldier to a commander due to her marvelous achievements. At the same time, Shang Yizhi has been struggling to survive as he is being hunted down. A Mai assists him in turning the tide. Meanwhile, she also has repeated encounters with the enemy general Chang Yu Qing in the battlefield. Through unexpected events, their paths cross again and they experience life and death together. In the face of the cruelties of the times, A Mai must make a decision for the sake of her country. Adapted from novel of the same name by Xian Cheng.
Cast Stars
View More Video Show All Episodes
Comments
Comments
Follow us on
News Telegram Discord