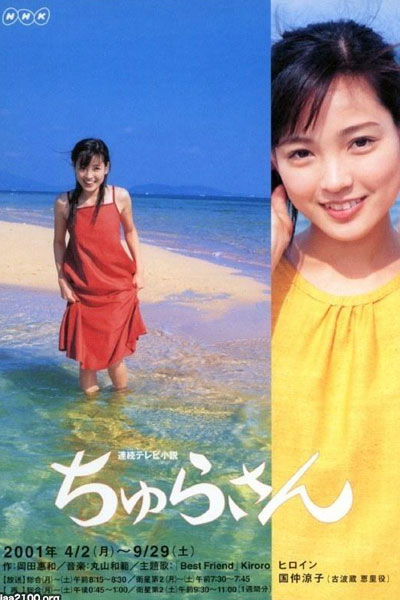 Other name: ちゅらさん The Promise of the Chura Sea

The 64th NHK Asadora Renzoku Drama is Churasan, a story of a young woman, Kohagura Eri, who was born in Kohamajima Island, Okinawa on May 15, 1972, the day when Okinawa was returned to Japan from the U.S. Eleven years later, Kamimura Shizuko and her two sons, Kazuya and Fumiya, come from Tokyo to stay as the guests of a small inn run by Eri’s family. Eri’s fun-loving, yet eccentric family welcomes them warmly. However, Eri is shocked to hear one of the sons, Kazuya is terminally ill and Shizuko and her sons came to Okinawa to spend his last moment together in beautiful nature. Fumiya, Kazuya’s younger brother, and Eri promise to marry each other someday. However, after Kazuya’s death, Fumiya and his mother leave the island to go back to Tokyo. Years later, they are reunited, Eri as a nurse and Fumiya, a doctor, working at the same hospital in Tokyo. The story's settings include Okinawa, Naha, and Tokyo. In 30th Television Academy Awards, the Drama won awards for Best Scriptwriter, Best Actress, Best Supporting Actress.
Cast Stars
Churasan (2001) trailer:
View More Video Show All Episodes
Comments
Comments
Follow us on
News Telegram Discord